The pace of scientific research into music making has never been greater. New data about music’s relationship to brainpower, wellness and other phenomena is changing the way we perceive mankind’s oldest art form, and it’s having a real-world effect on decisions about educational priorities.

The briefs below provide a glimpse into these exciting developments. For a more in-depth treatment of current music science, visit our affiliate, The International Foundation for Music Research. 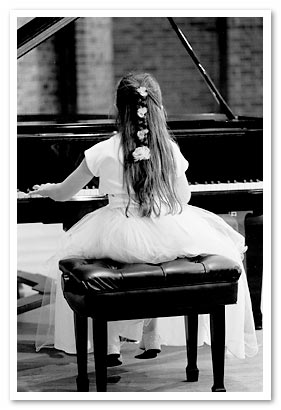 Middle school and high school students who participated in instrumental music scored significantly higher than their non-band peers in standardized tests. University studies conducted in Georgia and Texas found significant correlations between the number of years of instrumental music instruction and academic achievement in math, science and language arts.

Students who were exposed to the music-based lessons scored a full 100 percent higher on fractions tests than those who learned in the conventional manner. Second-grade and third-grade students were taught fractions in an untraditional manner ‹ by teaching them basic music rhythm notation. The group was taught about the relationships between eighth, quarter, half and whole notes. Their peers received traditional fraction instruction.

Music majors are the most likely group of college grads to be admitted to medical school. Physician and biologist Lewis Thomas studied the undergraduate majors of medical school applicants. He found that 66 percent of music majors who applied to med school were admitted, the highest percentage of any group. For comparison, (44 percent) of biochemistry majors were admitted. Also, a study of 7,500 university students revealed that music majors scored the highest reading scores among all majors including English, biology, chemistry and math.

Sources: “The Comparative Academic Abilities of Students in Education and in Other Areas of a Multi-focus University,” Peter H. Wood, ERIC Document No. ED327480

“The Case for Music in the Schools,” Phi Delta Kappan, February, 1994

Music study can help kids understand advanced music concepts. A grasp of proportional math and fractions is a prerequisite to math at higher levels, and children who do not master these areas cannot understand more advanced math critical to high-tech fields. Music involves ratios, fractions, proportions and thinking in space and time. Second-grade students were given four months of piano keyboard training, as well as time using newly designed math software. The group scored over 27 percent higher on proportional math and fractions tests than children who used only the math software.

Research shows that piano students are better equipped to comprehend mathematical and scientific concepts. A group of preschoolers received private piano keyboard lessons and singing lessons. A second group received private computer lessons. Those children who received piano/keyboard training performed 34 percent higher on tests measuring spatial-temporal ability than the others ‹ even those who received computer training. “Spatial-temporal” is basically proportional reasoning – ratios, fractions, proportions and thinking in space and time. This concept has long been considered a major obstacle in the teaching of elementary math and science.

Young children with developed rhythm skills perform better academically in early school years. Findings of a recent study showed that there was a significant difference in the academic achievement levels of students classified according to rhythmic competency. Students who were achieving at academic expectation scored high on all rhythmic tasks, while many of those who scored lower on the rhythmic test achieved below academic expectation.
Source: “The Relationship between Rhythmic Competency and Academic Performance in First Grade Children,” University of Central Florida, Debby MitchellDid You Know?
High school music students score higher on SATs in both verbal and math than their peers. In 2001, SAT takers with coursework/experience in music performance scored 57 points higher on the verbal portion of the test and 41 points higher on the math portion than students with no coursework/experience in the arts.

College-age musicians are emotionally healthier than their non-musician counterparts. A study conducted at the University of Texas looked at 362 students who were in their first semester of college. They were given three tests, measuring performance anxiety, emotional concerns and alcohol related problems. In addition to having fewer battles with the bottle, researchers also noted that the college-aged music students seemed to have surer footing when facing tests.

The world's top academic countries place a high value on music education. Hungary, Netherlands and Japan stand atop worldwide science achievement and have strong commitment to music education. All three countries have required music training at the elementary and middle school levels, both instrumental and vocal, for several decades. The centrality of music education to learning in the top-ranked countries seems to contradict the United States' focus on math, science, vocabulary, and technology.

Music training helps under-achievers. In Rhode Island, researchers studied eight public school first grade classes. Half of the classes became “test arts” groups, receiving ongoing music and visual arts training. In kindergarten, this group had lagged behind in scholastic performance. After seven months, the students were given a standardized test. The “test arts” group had caught up to their fellow students in reading and surpassed their classmates in math by 22 percent. In the second year of the project, the arts students widened this margin even further. Students were also evaluated on attitude and behavior. Classroom teachers noted improvement in these areas also.

Email Us For Lesson Information